The first person we know to have walked the Wall from one end to the other (since the Romans!) was William Hutton, a book seller from Birmingham, who set out from home on 4 July 1801.

[But note - an Introduction to Samuel Johnson's 'Journal of the Western Isles', written in 1990 by Peter Levi for the Folio edition quotes 'Stukeley having walked Hadrian's Wall from end to end in 1725.  Wikipedia quotes Piggott giving the same information - Piggot, Stuart (1985), ' William Stukeley: An Eighteenth-Century Antiquary',  New York: Thames and Hudson. ISBN 978-0-500-01360-1. The Oxford Dictionary of Natioanl Biography gives the same statement.]

He first walked all the way from home to Carlisle, then set off for Bowness, backtracked to Carlisle and continued to Newcastle and Wall’s End (23 July) - then back again to Carlisle – and home to Birmingham (7 August) – a round trip of 601 miles.

At one point, he was appalled to see workmen demolishing part of the wall to get stones for building a farm house. He wrote 'How little we value what is daily under the eye!'  He managed to persuade the landowner to stop the work - and the stretch concerned still survives intact at Brunton Bank 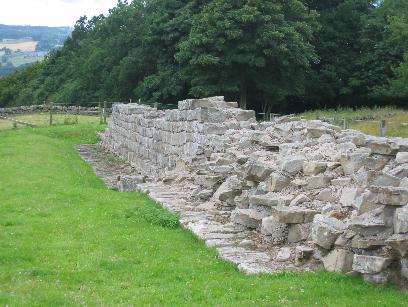 He was aged 77 at the time, and reckoned he lost a stone of weight on the walk.

He published his account of the journey in 1813, in a book entitled 'The History of the Roman Wall which crosses the Island of Great Britain from the German Ocean to the Irish Sea, describing its Ancient State and its Appearance in the year 1801

Text and photo by Bill Shannon. Portrait of Hutton from frontispiece to his History of the Roman Wall